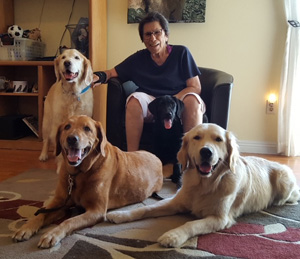 I have raised and trained quite a few service dogs since 1997. Each one included plenty of laughter, doubts, even tears. When you are with these pups twenty-four hours a day, you learn from each other … basic things like what to eat, where to potty, where noises come from and what they mean. I feel it is kind of like raising a child. When they’re ready to go out into the big world outside your home, you introduce them to other dogs and strangers. It’s important not to push the pup too quickly and to give him time to figure out the game. I have always said that my pups are like “velcro” dogs since I take them most places to help them transition to a new partner.

But, when the end of my role in their development nears, I find tears of happiness as well as tears of sadness. It is magic watching the duo bond and become a team. During transition training, I listen to the praise I used to give come from the new partner and feel like they have now joined the Pawsitive Teams family. Graduation day gives closure as I watch the pup I trained look up at the new partner for guidance, rather than looking at me.

I think the first pup you raise is the hardest to let go. Luckily, most of our graduates live here in San Diego. Like one of my graduates who moved away from San Diego once told me, “Charli, we’re not leaving you. We’re just moving!”   by Charli King, Cofounder