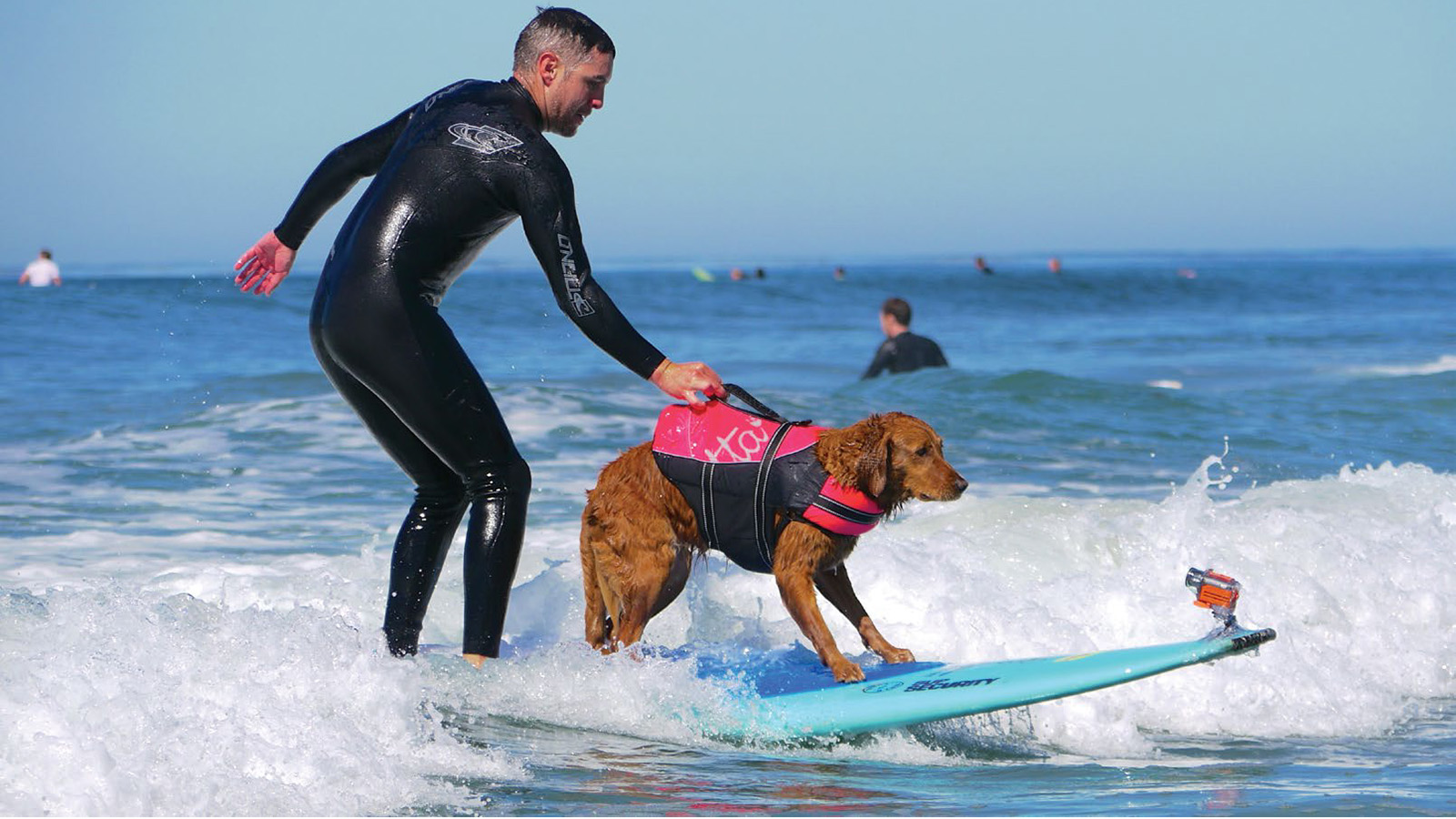 Surf Dog Ricochet, the SURFice Dog, is usually seen providing a lifeline in the water as she surfs with people with disabilities. But recently she’s been credited with saving the life of retired Staff Sergeant Randall Dexter who suffers from combat-related post traumatic stress disorder (PTSD) and a traumatic brain injury (TBI).

canine culture something to bark about

“I definitely feel that Ricochet saved my life. Before I met her I was very isolated and became depressed and suicidal. But, when I met Ricochet, I finally had a new sense of hope,”  Randy says.

Randy served two tours in Iraq as a U.S. Army combat medic. On April 5, 2005, his squad was hit with a very large improvised explosive device (IED) and he suffered a traumatic brain injury. The carnage from the blast was just the beginning of the horrors he experienced during the twenty-seven months he served. In April of 2009, Randy was formally diagnosed with PTSD and began his long journey into treatment.

He has been active in many different therapies, individual counseling and physical activities; but, he had a hard time functioning in day-today activities and looked at most situations as potential threats. He battled substance abuse, rage outbursts, horrific nightmares, panic attacks, and loss of hope. His soul was shattered and suicidal thoughts were frequent.

Randy and Ricochet met through Pawsitive Team’s six-week Canine Inspired Community Re-integration (CICR) program. The program helps service members reduce their PTSD symptoms through canine therapy. Over the years, veteran suicides have been increasing at an alarming rate. Through the CICR program, certified dogs accompany service members to places that evoke anxiety, such as supermarkets or crowded events. The program also gives the service members insight into what it would be like to have a service dog of their own.

When Randy first met Ricochet he was lost and broken, but they bonded instantly. She gave him what he was looking for, and he felt

fully alive for the first time in years. She sensed subtle changes in his body, detecting, alerting and re-directing his pain, anxiety, panic attacks and other symptoms, even before he knew they were happening. Through Ricochet, Randy found the strength he had lacked. He no longer needed medication, drugs, or alcohol. His suicidal thoughts subsided.

Randy finally had the security of a battle buddy again. In the military, a battle buddy is a battlefield partner, always ready to assist a fellow soldier. Ricochet became Randy’s second set of eyes when they went to potentially high-anxiety places. Without any training, she would stop Randy from going down heavily populated supermarket aisles or any area that contained a perceived threat; she intuitively knew it would cause him more anxiety. Randy also positioned Ricochet in front of or behind him to create a physical barrier
between himself and other people. When he faced one direction, Ricochet remained next to him, facing the other direction to watch for anything beyond his line of vision. “I didn’t train Ricochet to do this,” says Judy Fridono, Ricochet’s guardian. Four years ago when Fridono released Ricochet from the role of service dog due to her propensity for chasing birds, it never dawned on Fridono that Ricochet could be a service dog to an able-bodied person suffering from PTSD; but Ricochet’s proving quite capable.

Just as Ricochet had the natural ambition to jump on a surfboard with disabled surfer Patrick Ivison, she is again making her own choices and is now extending a lifeline to service members and veterans. Of course Fridono thought of giving Ricochet to Randy as a service dog. But, after much thought, both Randy and Fridono realized, based on Ricochet’s age and her unique platform, that Ricochet is meant to help many people in her own way. Ricochet helped raise $10,000 to fund a service dog for Randy, which he will receive in several months. Until then, Ricochet will continue assisting Randy. Although sharing personal hardships with the world is difficult, Randy is committed to helping others fighting PTSD. After the six-week CICR program ended, Randy created the PTSD Battle Buddy Initiative. PTSD Battle Buddy Initiative hopes to raise awareness of PTSD symptoms, remove the stigma associated with the disorder, provide support to veterans and their families, and—most importantly— reduce the veteran suicide rate. Ricochet and Randy are also committed to helping veterans wade through the cumbersome process of receiving a service dog. Our service men and women fought for us, now it’s our turn to fight for them. They may be home from the war, but they’re still fighting a battle.

Every life is worth fighting for. To join the fight, visit the websites listed below; or contact Judy Fridono at [email protected] or by calling (707) 228-0679.